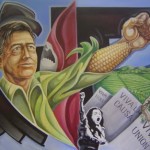 A mural by Roy Villalobo, depicting César Chávez emerging from a corn stalk, and his arm has become a cob of corn.

Who was César Chávez?

"Mexican-American César Chávez (1927-1993) was a prominent union leader and labor organizer. Hardened by his early experience as a migrant worker, Chávez founded the National Farm Workers Association in 1962. His union joined with the Agricultural Workers Organizing Committee in its first strike against grape growers in California, and the two organizations later merged to become the United Farm Workers. Stressing nonviolent methods, Chávez drew attention for his causes via boycotts, marches and hunger strikes. Despite conflicts with the Teamsters union and legal barriers, he was able to secure raises and improve conditions for farm workers in California, Texas, Arizona and Florida." (From César Chávez Facts & Summary)