While film adaptations (and reboots) of male superheroes and groups are common, superhero movies with non-white or female leads are rare. When a movie featuring a non-white or female lead fails at the box office, studios are much less willing to attempt a reboot. Films starring white actors are often viewed as having universal appeal, while film starring a non-white lead is viewed as appealing to an audience of the lead's demographic. Non-white actors are also viewed as unlikely to have the star power to draw in large numbers of viewers.

Superheroes in the Marvel Cinematic Universe

To recap, over the course of five years between 2008 and 2012, Marvel Studios released six movies. Of those six movies, there was only one woman of color, Martina, and she was an unimportant, forgettable character with a handful of lines who played into harmful stereotypes about Latinx women.

Retcon: A piece of new information that imposes a different interpretation on previously described events, typically used to facilitate a dramatic plot shift or account for an inconsistency. 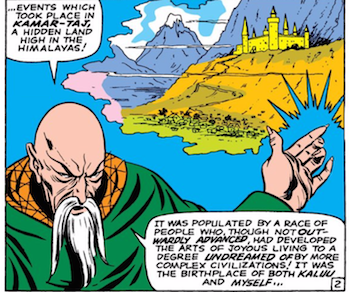 The Ancient One, as depicted in Strange Tales #148 (September 1966) by Bill Everett.

In the comics, the Ancient One was depicted as an elderly Tibetan man. In the Dr. Strange film, the Ancient One was changed to a Celtic woman, portrayed by Tilda Swinton. This casting decision was held up as one of several prominent examples of whitewashing, where a white actor was cast to play a character that is, or was historically, a person of color.

When describing the decision to make the Ancient One a white woman, director Derrickson and actress Tilda Swinton have said:

“I know the history of cinema and the portrayal of the Dragon Lady in Anna May Wong films, and the continued stereotype throughout film history and even more in television,” he continued. “I just didn’t feel like there was any way to get around that because the Dragon Lady, by definition, is a domineering, powerful, secretive, mysterious, Asian woman of age with duplicitous motives—and I just described Tilda’s character. I really felt like I was going to be contributing to a bad stereotype." -- Derrickson

Tilda Swinton also had an email exchange with Korean American comic/actress Margaret Cho. The following is one of the emails from Tilda to Margaret. The entire exchange can be read here.

Thank you so much for your reply! So grateful to have a chance to chew this cud with you. Super clear.

Here’s the situation I reckon Marvel was in. The old comic books from way back when are stuffed with stereotypes that we could all find offensive for any number of reasons.

The film - like any film adaptation - is a riff on the books. The Ancient One may have been written as a Tibetan man in the comics, but Marvel, in a conscious effort to shake up stereotypes, wanted to avoid tired cliché. They cast Chiwetel Ejiofor as the second lead - a white Transylvanian in the books. And wrote a significant Asian character to be played by Benedict Wong.

With The Ancient One (the ‘wise old Eastern geezer’ Fu Manchu type in the book), wanting to switch up the gender (another diversity department) and not wanting to engage with the old ‘Dragon Lady’ trope, they chose to write the character as being of (ancient) Celtic origin and offered that role to me. Presumably on Ancient grounds. I accepted happily, impressed that, for once, they aimed to disrupt the ‘wisdom must be male’ never-ending story - and, by the way, for once, wanting to feature a woman who’s a badass, over 26 and not simply bursting out of a bikini.

The biggest irony about this righteous protest targeting this particular film is the pains the makers went to to avoid it.

A - personal - irony to my being even remotely involved in this controversy is what I stand up for and always have. Whether it is challenging the idea of what women look like, or how any of us live our lives, or how we educate our children, diversity is pretty much my comfort zone. The idea of being caught on the wrong side of this debate is a bit of a nightmare to me.

I am as sick as anybody at the lack of a properly diverse cinematic universe. Pretty much sick of the Anglophone world in general, sick of all the men’s stories, sick of all the symmetrical features and Mattel-inspired limbs..

I’m a Scottish woman of 55 who lives in the Highlands. There’s precious little projected on contemporary cinema screens that means a great deal to my life, if truth be told.

How best might we focus this thing? To offer intelligent and empowered thinking.. And see something constructive coming out of this moment?

Ducking the issue is not what I am about. I want to meet it, but, if possible, move things forward by how I meet it.

I realise, as far as I am concerned, this possibly means saying nothing: so far I have attempted to correct the notion that I accepted an offer to play an Asian.. (!!) the most significant and damaging misunderstanding out there, it seems. Beyond that, I don’t feel it appropriate for me to add anything, certainly at this point.

But I would love to know what ideas you - or anyone you know - have of something properly progressive to bring to this table. The debate is so important for all of us. It needs to build itself on strong ground.

Jessica Prois, writing in Huffington Post, describes Tilda's e-mail as "textbook white feminism... "Instead, she took a white feminist approach ― which is not a label that has anything to do with her being a feminist who also happens to be white ― but has everything to do with blatantly leaving out concerns people of color might have."

What do you think Prois meant by this?

Other debates around whitewashing in the MCU

In the comics, The Mandarin is a Chinese villain, of the Fu Manchu stereotype. In Iron Man 3, the character is portrayed by Ben Kingsley, an actor of British-Indian descent.

In the comics, Scarlet Witch and Quicksilver's Roma and Jewish ancestry play a significant role in the characters' back story. These elements are erased in the MCU.

Although in the comics, Iron Fist is a white character, critics argued that the original character reinforced racist tropes and the character should be played by an Asian actor.

Instances of Racebending in the Marvel Cinematic Universe

Both characters draw from alternate universes, instead of the primary Earth-616 universe.

This is absurd. The Iron Fist that I have enjoyed for 40 years is not a racist trope. https://t.co/1eUcHcb9BM

I simply don't understand this. Danny Rand has always been portrayed as blonde haired, Caucasian, fish out of water. https://t.co/yH8ppb17jX

@SamShotFirst that's not Danny Rand. Why the reverse white-washing? Why is that necessary?

This is about a comic character being cast to reflect his history. You are making it something else. Why is race an issue w/this? https://t.co/XyaK1kCmzd

Comments on Movie Pilot's "Why 'Spider-Man: Homecoming's Black Mary-Jane Is A Major Win For The MCU"

"So what they are doing is messing it up. If your character is white cast white. If black cast black. There is nothing wrong with casting only white people if that is what they character is. Sick of this crap and diversity."

"I'm all for diversity. Yes, cast Zendaya, just make her an original character. Someone people of color an get behind without treading on what others love already. Why do they have to steal our toys to enjoy their own? Get your own damn toys! Marvel has been waving the diversity flag a bit too much lately. I don't mind them creating new awesome characters. Changing heroes is sometimes even acceptable as long as it is passing on a title and not changing the very characteristics of a person."

Comments on Racebending's "On Marvel, Mandarin, and Marginalization"

"Great breakdown! For PoC who are fans of genre entertainment, it doesn't get any realer than this. Now, instead of banking on Marvel to do something, why don't a bunch of us get a kickstarter going, and with a script start making our own scifi/fantasy movies? Very difficult, yes, but way more rewarding."

"Y'all are full of crap, it's not about race it's about acting skill and Ben Kingsley is an amazing actor and as for "the lack of diversity in Marvel" among the newer characters there are plenty of heroes/allies of non-white origin, it's just a sign of the times, most of those story lines started in the comic books before the 80's, Captain America #1 came out in 1941 and the movies are trying to stay relatively true to the source. Your problem is that you look for a problem of race/gender biased agenda when there isn't one. You can't base today's values off of stories that of which the earliest came out in the forties.
All the movies do is hilight a change in times, they reflect a story line that is old, times change, it isn't hollywood being biased, it's hollywood staying close to the original story."

What is the relationship between comics and superhero movies? What license do filmmakers have to introduce diversity in their storylines?

How does today's discussion of race and representation relate to our work in libraries?