"Iowa State University aspires to be the best land‐grant university at creating a welcoming and inclusive environment where diverse individuals can succeed and thrive. As a land‐grant institution, we are committed to the caretaking of this land and would like to begin this event by acknowledging those who have previously taken care of the land on which we gather. Before this site became Iowa State University, it was the ancestral lands and territory of the Baxoje (bah-kho-dzhe), or Ioway Nation. The United States obtained the land from the Meskwaki and Sauk nations in the Treaty of 1842. We wish to recognize our obligations to this land and to the people who took care of it, as well as to the 17,000 Native people who live in Iowa today." ISU Land Acknowledgement, Approved and posted February 18, 2020.

We would also like to recognize additional nations with historic and current connections to the state of Iowa, including the Winnebago and Ho-Chunk, the Omaha, the Dakota and Yankton Sioux, and the Potawatomi, Otoe, and Menominee nations, among others.

There are many American Indian people with roots in Iowa, both currently and historically.  Here are links to a number of nations.

This exhibit presents a wide selection of recent and historical topics to celebrate Indigenous Heritage Month. Selected books, resources, and even TikToks are included for your reading and viewing pleasure. Enjoy! 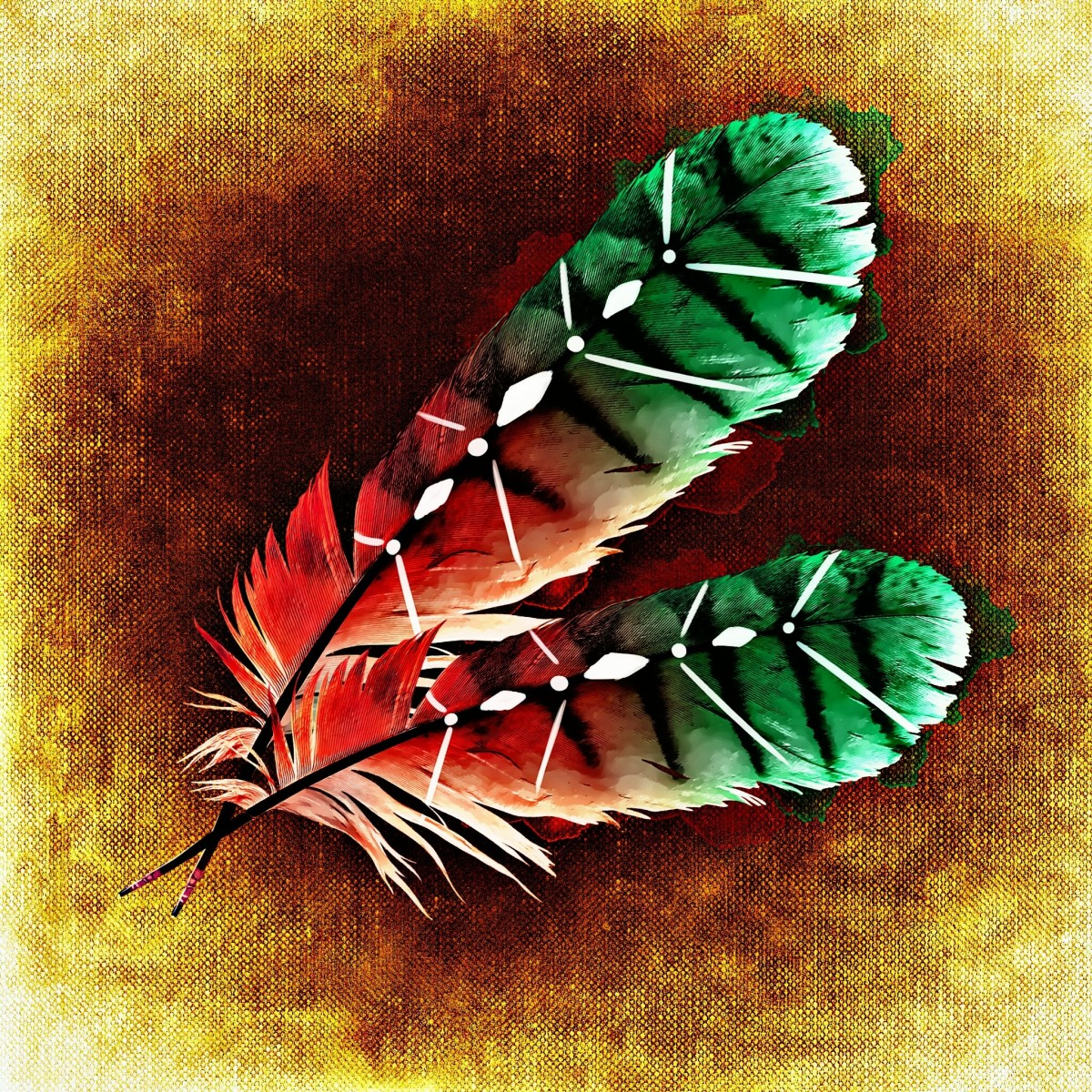 Illustration of green and red patterned feathers against a golden background. Licensed under Creative Commons CC0.

Indigenous Heritage Month is celebrated during the month of November. This commemorative month aims to provide a platform for Native people in the United States of America to share their culture, traditions, music, crafts, dance, and ways and concepts of life. President George H. W. Bush first declared November as National American Indian Heritage Month, thereafter commonly referred to as Indigenous Heritage Month, on August 3, 1990 and it was considered a landmark bill that honored indigenous tribal populations.

Which Tribal Nations still have land in the state of Iowa today?

Which state was the first to adopt legislation protecting Native American remains in the U.S.?

Iowa. Indigenous protests led by local activists, such as Maria Pearson and Don Wanatee, began in the early 1970s and raised issues of proper disposition of Indigenous burials, the defilement of Indigenous burial grounds, and equal protection under the law. Their work resulted in Iowa Burials Protection Act of 1976.

What are the top five counties with the highest Native populations in Iowa?

According to 2020 reports, Woodbury, Polk, Tama, Pottawattami, and Scott counties are the highest and make up about 45.2% of Iowa's total Native population combined. For more figures, check out this report published by the State Library of Iowa.

Sacred birds, such as eagles, hawks, and owls, are important to what kind of art?

What Iowa Union Army camp served as a prison camp for indigenous people?

Camp Kearney in Davenport, Iowa. Originally founded as a Union training camp for the Civil War effort, President Abraham Lincoln signed off on the order that imprisoned about 265 Dakota men from 1863-66 following the US-Dakota in Minnesota.

What styles of traditional headdress are most common in the Midwest?

This exhibit was created by Hema Thulsidhos and Katie Wampole of the ISU Library's DEI Committee with contributions from UNASA.